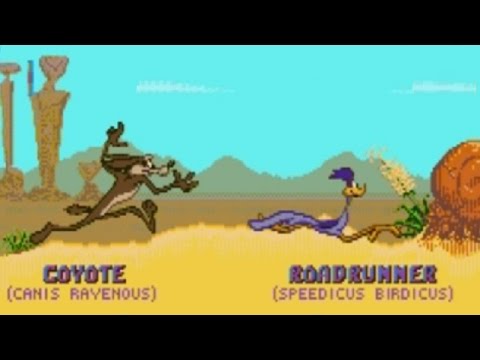 Played through the game with both characters on the default difficulty setting. The video begins with the Wile E. Coyote playthrough, making sure to show all of the bonus stages. The Road Runner playthrough begins at 25:50.

Desert Demolition is an awful lot like another Looney Tunes game on the Genesis game, Sylvester and Tweety in Cagey Capers. They both are simple platformers that revolve around chasing your prey (with murderous intent, of course) with gorgeous graphics that make them feel like playable cartoons. Check out Sylvester and Tweety here:

Desert Demolition is nothing if not dedicated title the source material here. The animation and color use is amazing, and the characters’ personalities shine through with little effort.

It is awfully easy and short, though, even with Road Runner and Coyote offering entirely different levels and abilities. Coyote uses his Acme traps to do everything he can to catch the stupid bird, and Road Runner meep-meeps through his stages like a cracked out avian Sonic, loop-de-loops included. Truth be told, the Wile E. Coyote’s levels are pretty fun. The Road Runner stages tend to be a bit on the dull side.

Overall, Desert Demolition is a pretty good little game. It’s really short and easy, but it’ll definitely make you feel like you’re a kid sitting in front of the TV on Saturday morning again for a bit. Doesn’t that alone make it worth a peek?
____
No cheats were used during the recording of this video.

NintendoComplete ( punches you in the face with in-depth reviews, screenshot archives, and music from classic 8-bit NES games!

Visit for the latest updates!