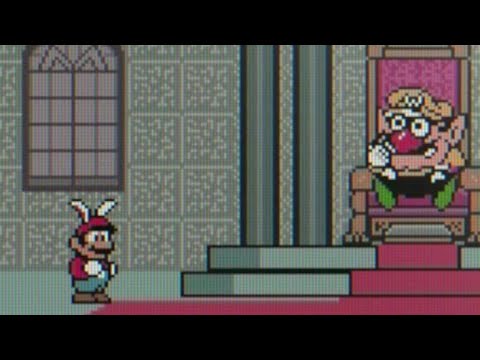 The game, as I am playing it here, has been patched with Toruzz’s “Super Mario Land 2 DX” patch that was released on Christmas. What an excellent update to the original Game Boy game this is. The game now runs perfectly in full color on real GBC hardware, and sports a a few tweaks and options to further improve the game. For all intents and purposes, it’s the same game as the original 1992 release, but after you see it, you won’t want to go back to the green-screen original.

For further info about the patch, see

The original game was a fantastic follow-up to the original Mario launch title on the Game Boy, adapting pieces of Mario 3 and Mario World to its own unique (and at times bizarre) take on the world-famous plumber. It certainly still feels like Yokoi’s style more than it does Miyamoto’s.

Anyway, this patch is fantastic. I can’t imagine how much work must have gone into it – this isn’t a slap-dash job with Super Game Boy style palettes globbed across everything. All of the graphics have been completely colored as individual elements and it all looks like a completely legit Nintendo Zelda DX-style upgrade for how professionally it has been done. There aren’t any glitches or distortions in the graphics from the modification whatsoever – it looks like it was originally designed this way. And it makes full use of the GBC’s graphics capabilities, so don’t be surprised when you start to realize how just how much better it looks than an NES game. Props to Toruzz for such quality work – thanks!

In case you’d like to see the original game in all of it’s green dot-matrix glory, you can find it at

*Recorded using a Retroarch shader to mimic the look of the original Game Boy Color’s screen.
_
No cheats were used during the recording of this video.

NintendoComplete ( punches you in the face with in-depth reviews, screenshot archives, and music from classic 8-bit NES games!

Visit for the latest updates!